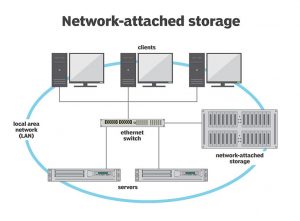 Network-attached Storage (NAS) servers are used for accessing, storing, and sharing data between clients connected to it. There are different types of NAS servers available in the market, based on the amount of data to be stored, type of supported hard drive interface, network bandwidth, type of client connectivity, RAID support, and so on. Broadly, NAS servers are segregated into three different categories: 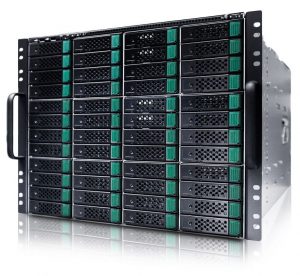 They have several bays to accommodate multiple high capacity storage drives. Some advanced NAS servers can provide a storage capacity of more than 1000 TB (1 petabyte).

These high-end servers can easily handle multiple requests coming from different users in the organization because of the support for higher network bandwidth and quicker processing speed.

Moreover, you can configure such NAS servers with different RAID levels to increase performance and leverage RAID disk fault-tolerance. Most of the enterprise-level NAS servers used in large organizations support RAID 0, RAID 1, RAID 1 + 0, RAID 5, RAID 5 + 0, RAID 6, and other RAID configurations.

One of the major requirements of large businesses is the high availability of servers. Thus, to provide high availability, enterprise-level NAS servers can be clustered with other NAS. So, if a NAS server encounters any problem, another server from the cluster takes over the server having issues. 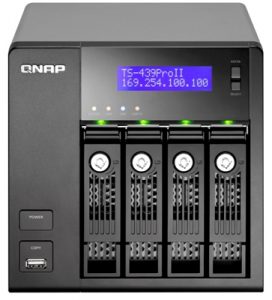 Midmarket NAS servers support storage capacity of up to 64 TB, which is comparatively lower than the enterprise-level NAS servers. 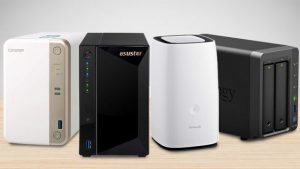 Consumer-level NAS servers are the cheapest among the categories. As these low-end NAS are manufactured considering the requirement of home users, they can support connectivity of nearly 20 clients only. These servers are capable of storing and backing up home user’s data, streaming media files for them, sharing and synchronizing files, giving users remote access to their data, etc. They usually don’t have support for RAID functionality.

Enterprise-level and midmarket NAS severs are less vulnerable to data loss as compared to consumer-level NAS. Most of the enterprise-level and midmarket NAS servers support fault-tolerant RAID configuration allowing you to rebuild RAID (within fault-tolerance limits) in case of failure of RAID disk and restore data. Moreover, some of these servers offer a cloud storage feature so that you can restore data from the cloud backup if required.

If you’ve lost data from enterprise-level NAS, midmarket NAS, or consumer-level NAS, you must not use hit-and-trial methods of data recovery. This may put your huge amount of crucial business and personal data at risk of permanent loss. Instead, you must contact a NAS data recovery expert such as Stellar in the first place to recover the lost data with safety.