Summary – This blog highlights the advantages and disadvantages of different RAID Levels, and thus helps you make an informed decision about implementing the right RAID level. It also outlines a RAID Recovery solution to recover corrupted data in a RAID implementation.

Redundant Array of Independent Disks or RAID is a data storage virtualization technology in which multiple hard disks are combined together to form one or more logical units to provide redundancy, reliability, and scalability.

Each of the RAID levels serves a different purpose, as elaborated in the following sections. (Before, proceeding with understanding about the pros and cons of the different RAID levels. It is important for you to know how to choose the RAID level that’s right for you.)

A primer on factors to choose the right RAID Level

RAID 0 uses striping, which means the data in RAID Level 0 is split equally across all of the disks. Here, the storage capacity is the sum of the capacities of all the disks in the array, similar to a spanned volume. By using at least 2 disks simultaneously, it offers superior input-output performance. This performance can be enhanced further by using multiple controllers; ideally, one controller per disk.

RAID 0 does not provide redundancy or fault tolerance for handling disk failures, same as with a spanned volume. Thus, failure of one disk causes complete RAID data loss and reduces the possibility of RAID data recovery in comparison to a broken spanned volume.

RAID Level 1 uses mirroring with no parity, striping, or spanning of disk space across multiple disks.

It is a setup of at least two drives that contain an exact copy or mirror of data. This means that all the data is redundant, by writing it on data disk and on the mirror disk. This array is useful when read performance is important as compared to write-performance. Moreover, it will continue to operate as long as one disk is in an operational state. If a drive fails, then the controller uses either the data disk or the mirror disk for data accessibility and continuity.

RAID Level 5 combines block-level striping with distributed parity among drives. It is the most common and secure RAID level.

RAID 5 requires a minimum of 3 drives and can work with up to a maximum of 16 drives. Data blocks are striped across the disks, and on one disk a parity checksum of all the block data is written. The parity data is not written on a fixed drive but is spread across all the drives. With this data, the computer can recalculate the data of other blocks. That means this type of array can withstand the failure of a drive without losing data. Although it can be achieved in the software, it is recommended to use a hardware controller. The extra cache memory is used on these controllers to improve the write performance. RAID level 5 combines storage with security and performance.

RAID Level 6 is similar to RAID 5 with an added advantage of double distributed parity, which provides fault tolerance up to 2 failed drives. It can take hours or days to rebuild this RAID array. During the rebuilding of RAID 5 if two drives fail, then data can be lost. But, in RAID 6, the RAID array will survive even after the second drive failure, thereby making RAID 6 more secure than RAID 5. 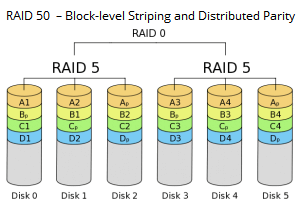 RAID Level 50 combines RAID 5 and RAID 0. That means the parity distribution and striping are visible in one single RAID array. RAID 50 is a nested or hybrid RAID and sometimes referred to as RAID 5 + 0.

Configuring RAID 50 requires a minimum of 6 drives. It provides better write performance and security, including faster rebuild time than RAID 5 in case of a disk failure. Further, this RAID level offers increased capacity and performance by striping data into multiple drives.

Additional Reading : How to recover data from Raid 5?

RAID 60 is another type of nested or hybrid RAID that combines block-striping of RAID level 0 with dual parity of RAID level 6. It is similar to RAID 50 but offers better data reliability with less performance. This RAID level also supports larger volumes.

Sometimes referred to as RAID 6 + 0, RAID 60 implementation requires a minimum of 8 disks (or a 4 disk set of RAID 6) to operate.

Additional Reading :Raid Server Recovery – What to Do If Your RAID Server Crashes?

Even though RAID levels provide data redundancy. But it is not a good choice to backup your critical data. That’s because while most RAID configurations protect you against hardware failure, they do not protect you against data corruption or malicious activity.

To avoid data loss, make sure to create a backup of your critical data on a separate hard drive. If you still encounter data loss situation due to failure of a RAID disk drive, then use RAID data recovery services offered by Stellar Data Recovery. You can avail Stellar Remote data recovery services for all logical data loss cases. Our professional will check your Raid drive remotely. Then our Raid Recovery experts will provide you further process.