The server was hosting crucial data of the organization’s customers, including the employees’ details, patients’ history, health reports, accounting data, images, and other business-critical documents.

Recently, when the client tried accessing the data stored in a ZFS volume, it received a file system corruption error message.

The client attempted the following to fix the problem:

What made this RAID data recovery case rare and complex?

This was a critical and complex data loss case concerning a RAID Z recovery and volume functioning in a complex and sophisticated environment.

The client was using the latest Community Edition of NexentaStor, a UNIX-like computer operating system that creates storage virtualization pools consisting of multiple hard disk drives. The OS was integrated and optimized for the VMware infrastructure environment. 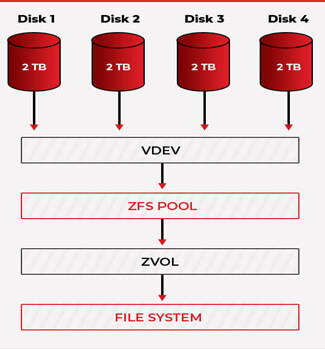 The client had lost the data from this ZFS storage pool volume due to file system corruption.

The Stellar team successfully recovered 100% data from the corrupted ZFS pool volume. This was a remarkable remote ZFS pool recovery case, a first in India.

Stellar® RAID data expert team performed an online examination of the RAID Z hard disk drives for Raid Z Recovery. To facilitate the online analysis, the Stellar data recovery technician emailed a secure remote access application link to the client organization to map the client system with Stellar’s server. The client accessed the link through its computer to establish the remote connection.

After analyzing the four RAID HDDs, the team found that the hard drives’ health was up to mark, but there was corruption in the ZFS storage pool volume with broken inode links.

Note: The inode is a numbered data structure in a ZFS file system. It describes a file-system object and stores the attributes (that contain metadata, owner, and permission data) and disk block locations of the object's data.

The team concluded a logical corruption in the ZFS volume, due to which the data was inaccessible.

Data recovery was not possible from the corrupt volume. So the next step was to repair the ZFS pool. It was a tedious task as the team had to rebuild the broken inodes of the ZFS pool volume manually. It took about two weeks to reconstruct the ZFS volume and reinstate it to a functional state.

A byte-wise scanning of the ZFS volume image file revealed the presence of the NexentaStor 4.0.3 operating system.

The scan results showed VMware ESXi hypervisor volume of 5.5 TB capacity having 25 VHDx files. The actual data required by the client was inside these VHDx files.

Stellar RAID data expert team recovered 100% data from the ZFS-based RAID Z deployed on the DELL R710 server. It restored the files to their original form and shared a detailed assessment and recovery report with the client organization. Stellar team completed the entire RAID Z data recovery assignment within the specified time. Stellar, an ISO 9001:27001 organization, maintained a strict adherence to ISO process standards for ensuring the confidentiality, security, privacy of the client’s data.

Business-critical data of the organization’s customers was at risk.

Recover all files and folders from corrupt RAID Z volume on Dell R 710 server with the assurance of data privacy.